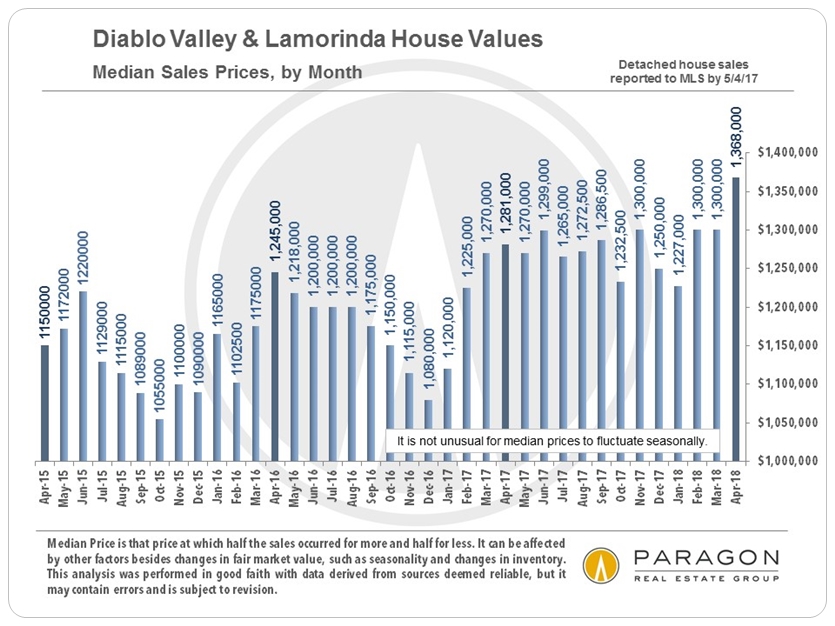 Before diving into prices and trends in individual city markets, these 3 charts are overviews for the greater Diablo Valley and Lamorinda market. In April 2018, the median house sales price hit a new peak price – 5% higher than the previous high. 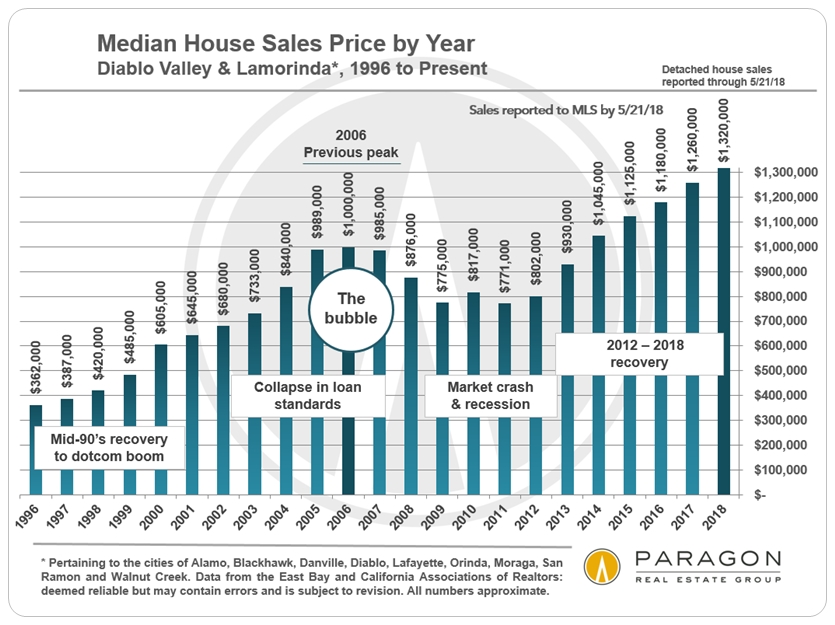 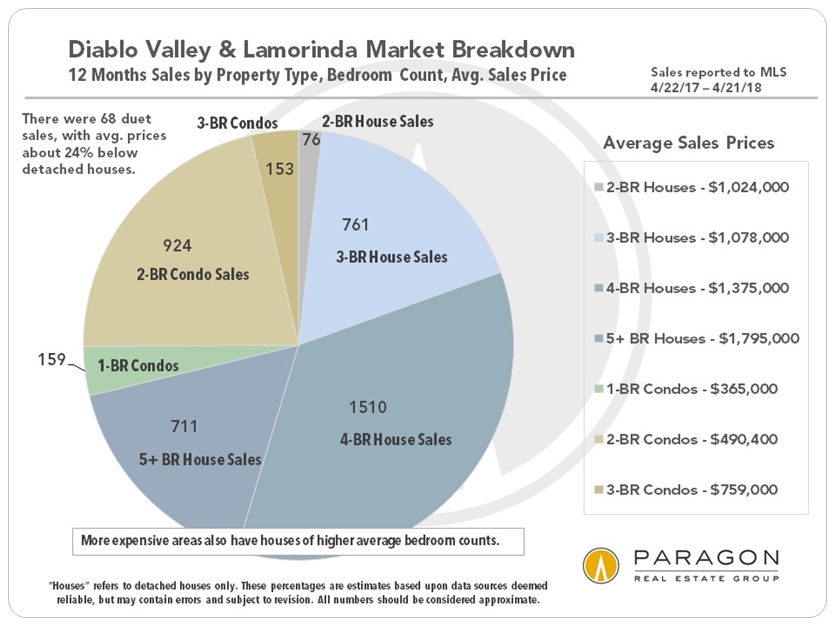 Though we tend to speak of the real estate market as a single reality, in fact, market size and dynamics vary considerably by community and price segment. As further context to the analyses below, here are links to 2 charts from our April report illustrating home prices and price per square foot values by city: Median Home Sales Prices &Average Dollar per Square Foot Values

Following this series of charts is an analysis of how different Diablo Valley markets have performed since 2000: boom, bust and recovery. 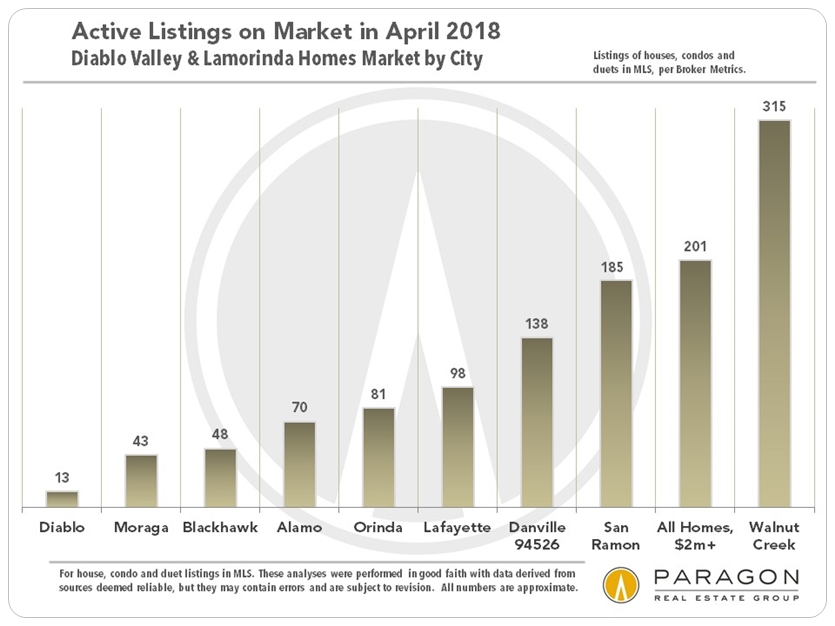 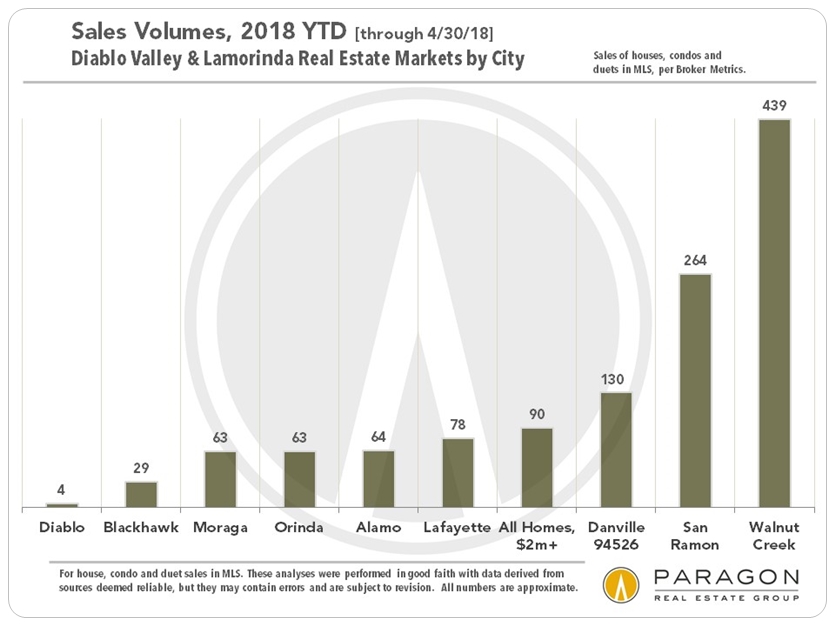 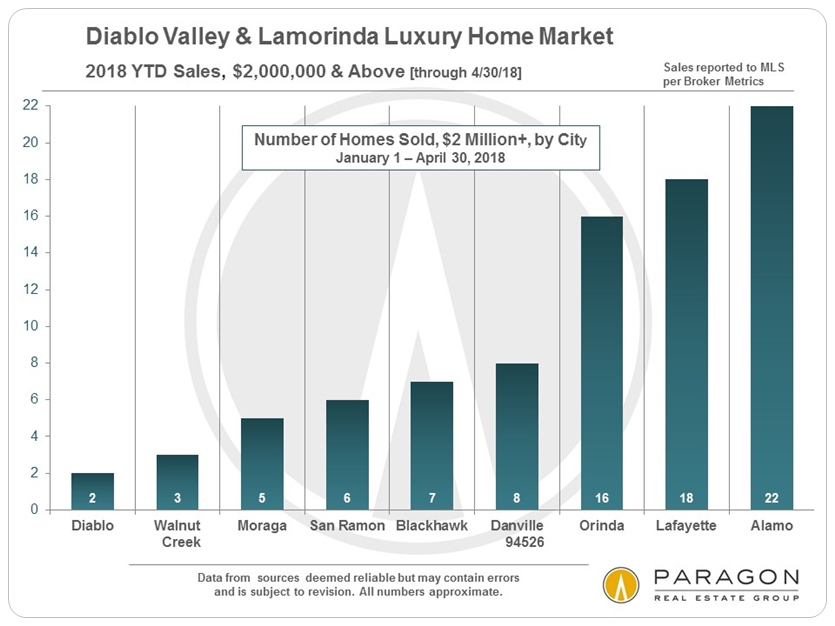 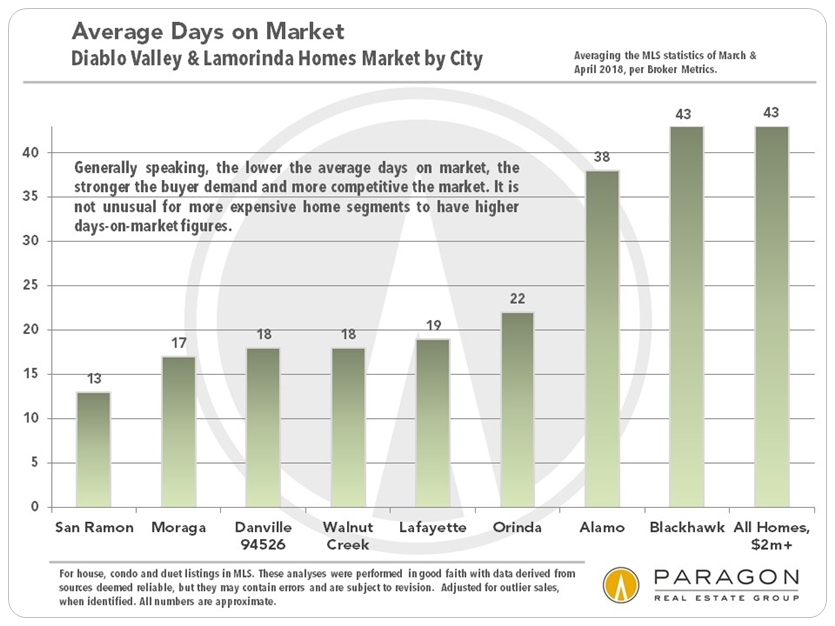 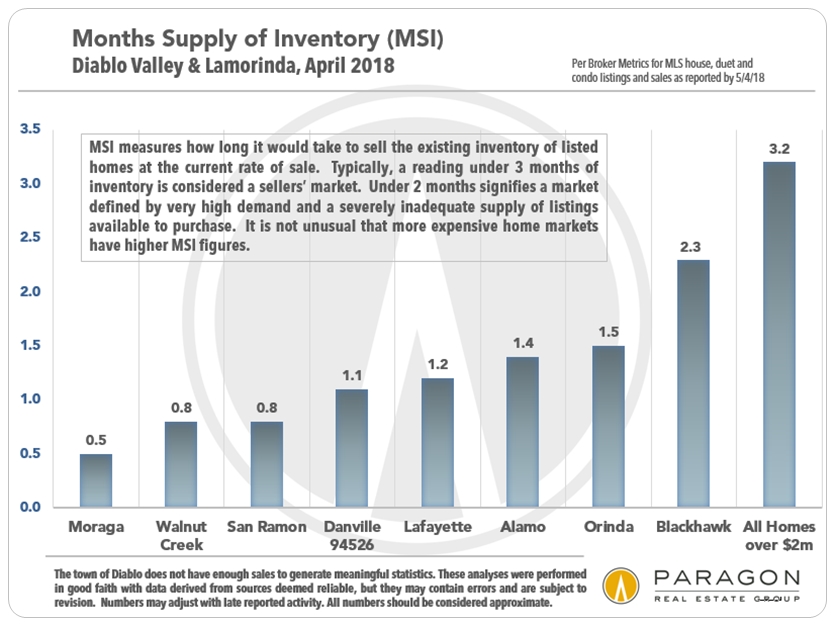 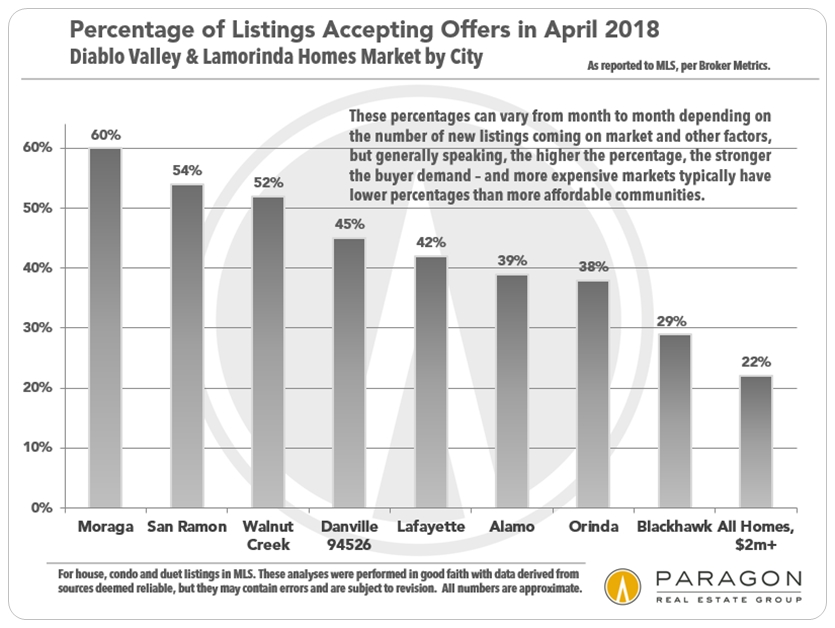 Up, Down & Up: Diablo Valley Home
Value Changes since 2000

The calculations below were made by averaging both median sales price and average dollar per square foot appreciation rates. Present values are based on sales occurring in Q4 2017 and Q1 2018.

2000 to Peak of Bubble,
Crash to Bottom of Market
The lowest priced homes around the Bay Area saw by far the biggest bubbles (2000 to 2006) and crashes (2008-2011), mostly due to the predatory lending/ subprime financing crisis which pumped up prices beyond what buyers could actually afford to pay for in monthly housing costs: Think of absurdly low teaser rates, no down-payment loans, so-called liar loans, constant refinancing pitches to suck out equity, and promises that home prices only go up. The ups and downs in more affluent markets were certainly significant, but much smaller. 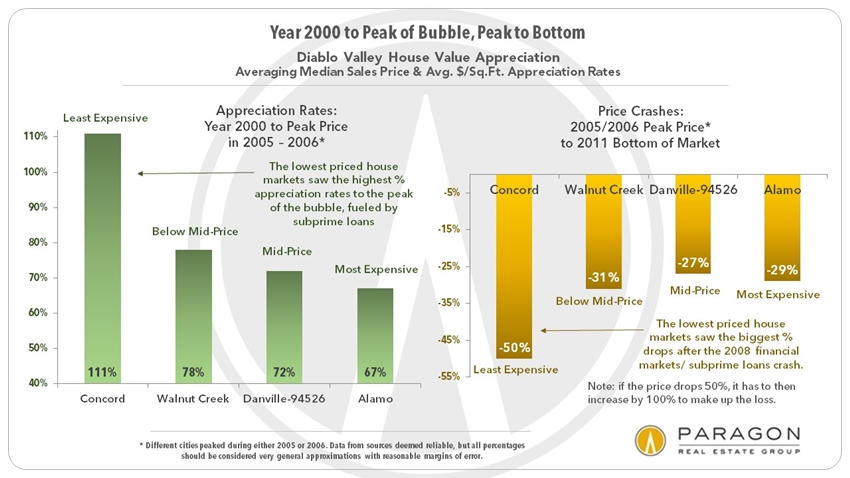 2012 to 2015, a major factor in the gigantic jump in the lowest priced Bay Area communities was simply the fact that home prices had crashed so unnaturally low due to distressed property sales after the bubble popped. However, even with its very high appreciation rate, Concord in 2015 still remained below its median price in 2006, while the other, higher price segments were beginning to surpass their previous peak prices.

In 2015, the market shifted a bit – there was considerable financial market volatility in late 2015 and the first half of 2016 and the high-tech boom cooled temporarily – and appreciation rates diverged in a somewhat different way, with increases in more affordable cities – such as Concord, Walnut Creek and San Ramon – appreciably outpacing those in more expensive cities, such as Danville, Blackhawk and Alamo. One factor was that buyers were simply searching for homes they could still afford, which added heightened pressure to less costly markets. This was a common phenomenon across local county markets. 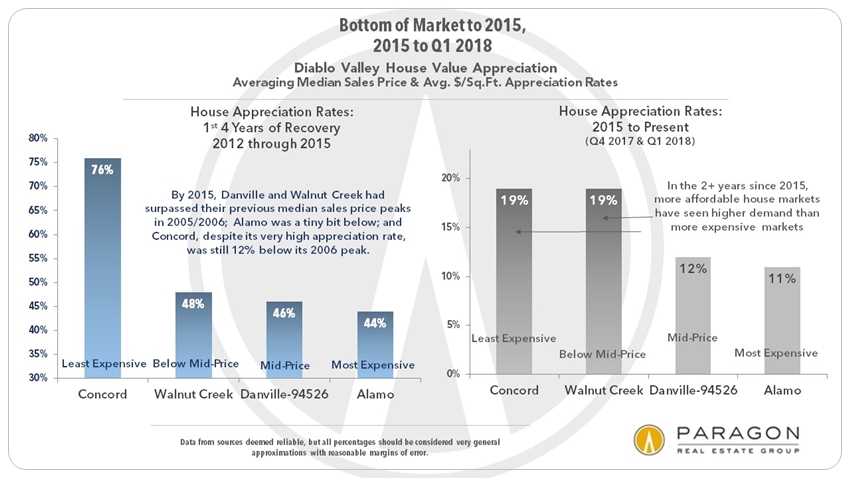 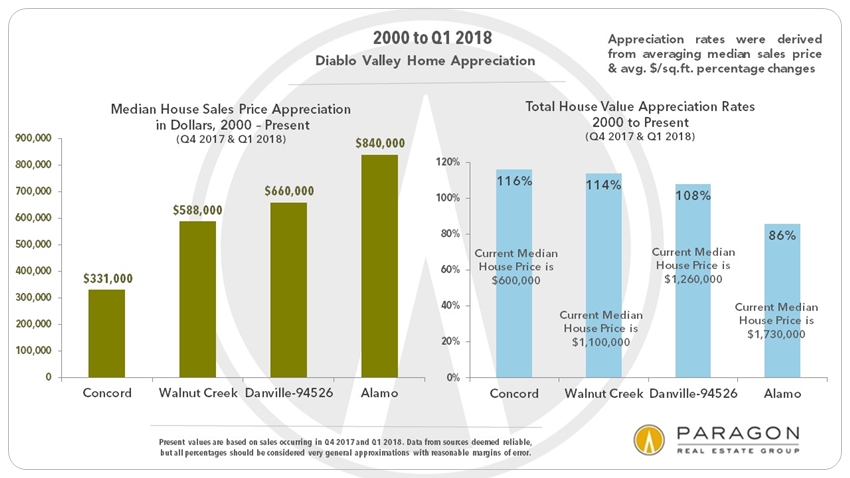 These analyses were made in good faith with data from sources deemed reliable, but may contain errors and are subject to revision.

A Lin
Read more
Back to top