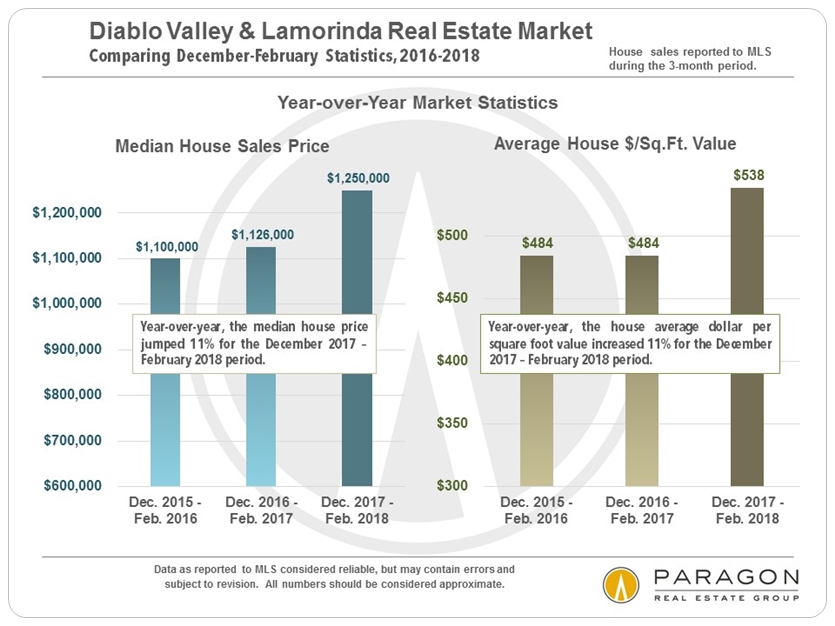 So far in 2018, the market seems to have mostly brushed aside concerns about increasing home prices, rising interest rates, stock market volatility and new federal tax law changes. It is still too early to come to definitive conclusions about where the year is going, but right now, in most market segments, buyer demand remains very strong for a limited supply of listings. This is especially true in the more affordable home segments, a dynamic playing out around the Bay Area. Of course, whatever the price segment, how buyers respond to a particular listing depends on the specific property and its location, appeal, preparation, marketing and pricing: Some listings sell very quickly, some only sell after price reductions, and some do not sell at all.

As an example of what is going on so far in 2018, our home sales in Diablo Valley and Lamorinda here at Paragon are up 48% for January and February as compared to last year, though admittedly we are outperforming the general market, which is still up by 5.4% (per Broker Metrics for dollar volume MLS sales).

In San Francisco, a house worth $1m can sit next to one worth $3m, each on its own narrow 2500 square foot lot, but in Diablo Valley and Lamorinda, with much more land to stretch out on, home values correlate surprisingly closely to lot size, as illustrated below. Which, of course, does not mean this applies to every home in the area. 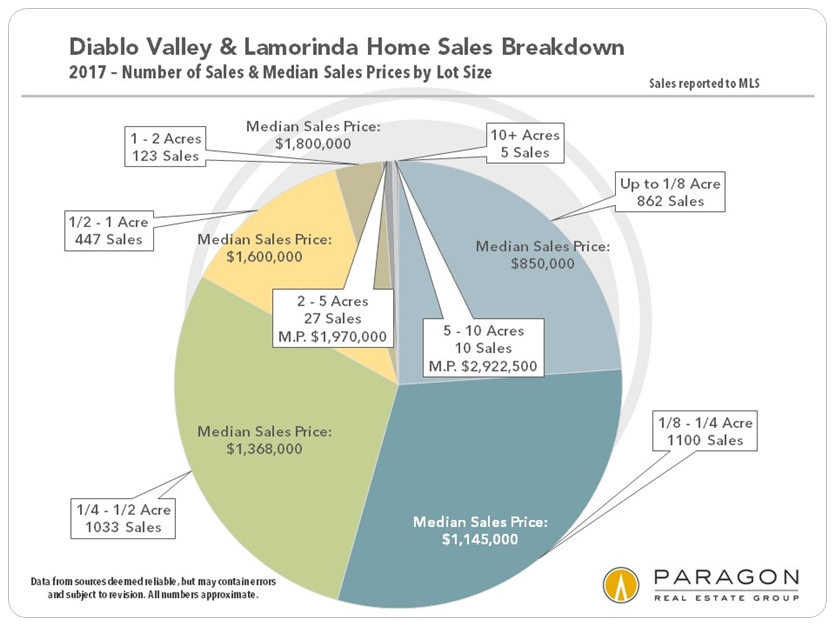 The next 5 charts look at house value appreciation in cities and towns around the area, from most affordable, to more expensive, to most expensive. Diablo, probably the most expensive enclave in Diablo Valley, is not included in the median sales price charts because of how few sales occur there in any given year, which makes median prices jump up and down without great meaningfulness.

Year-over-year appreciation has been quite consistent around the area since the market recovery began in 2012. 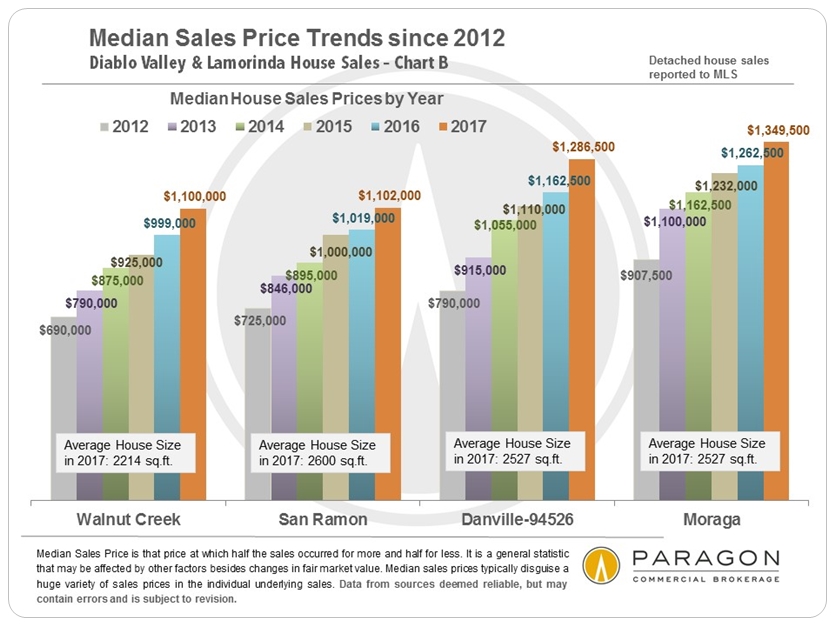 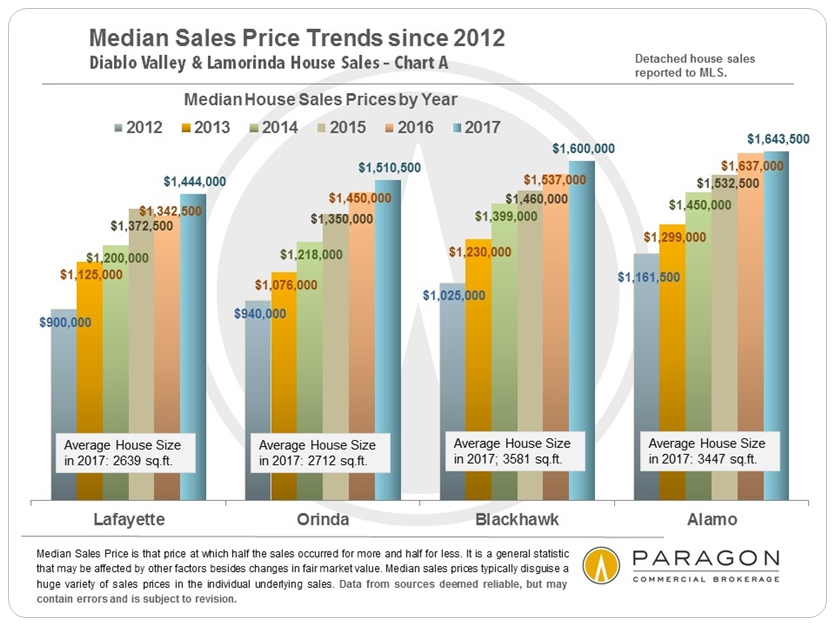 Average Price per Square Foot House Values
by City since 2012 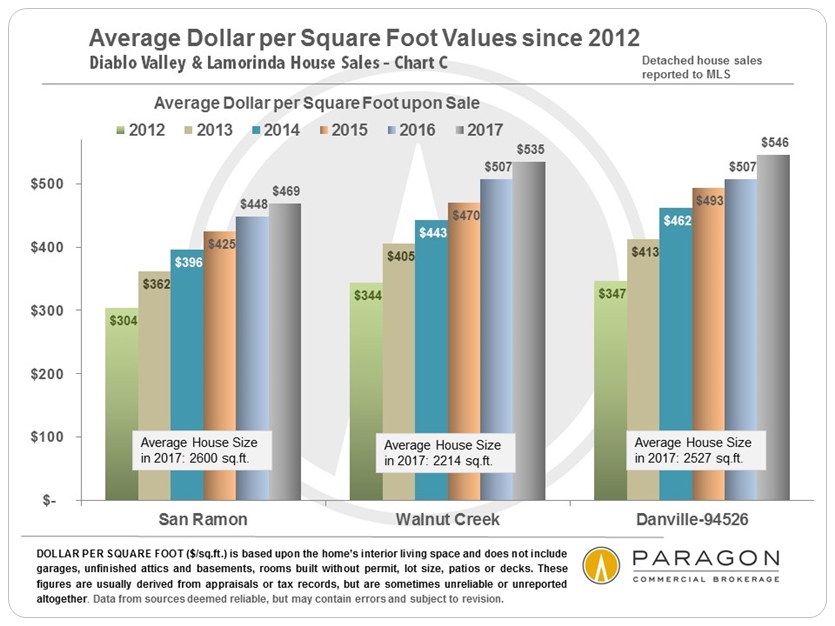 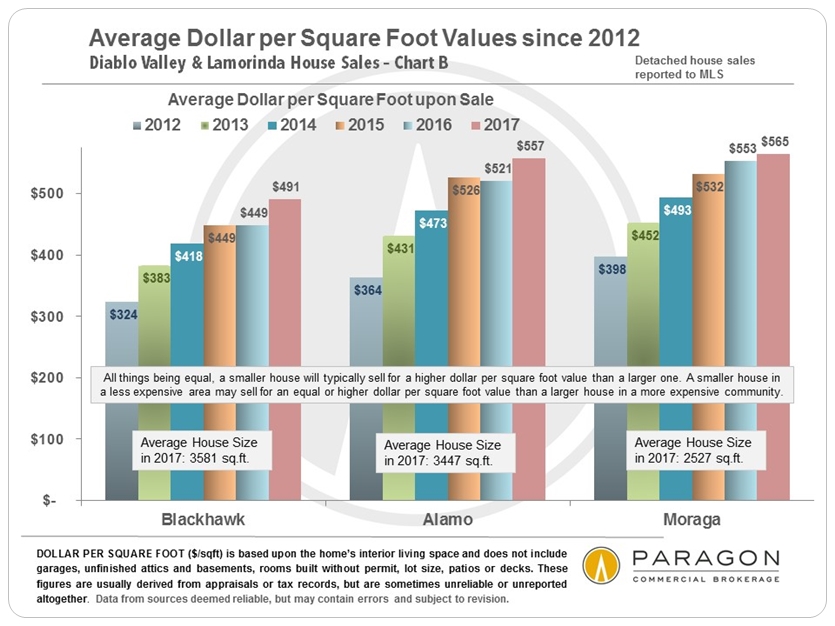 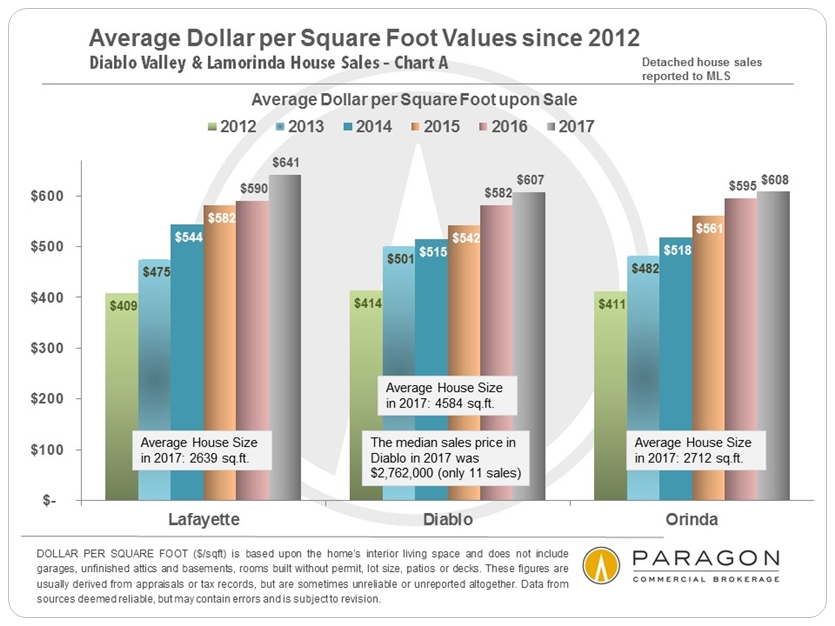 As seen below, as measured by two classic statistics of supply and demand, the market in recent months has not softened in comparison to the last 2 years, and by these measurements, is significantly hotter than last year at this time. 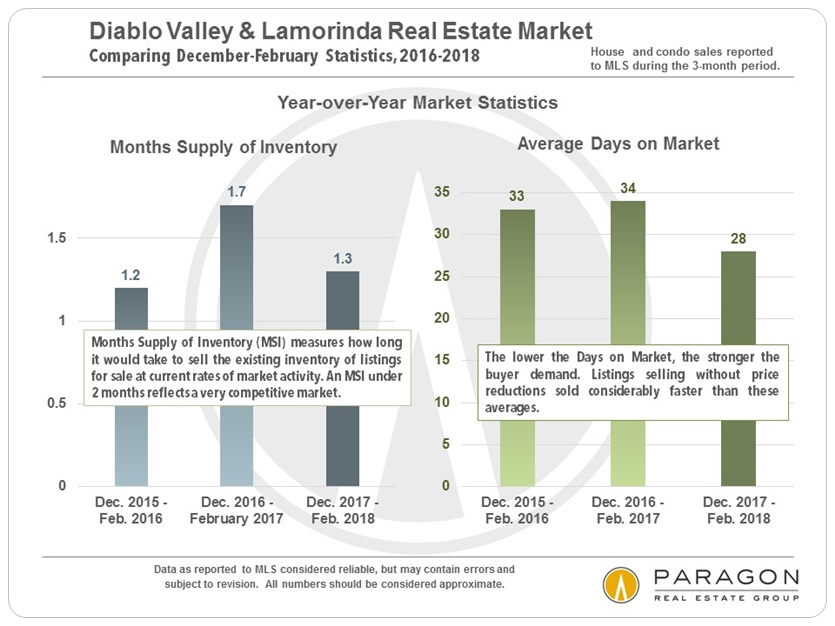 Active Listings on Market
by Month & by City

This next chart illustrates both the seasonality of the market and the size of the respective city markets in Diablo Valley and Lamorinda. We are just now entering the spring selling season when inventory and demand swells dramatically. 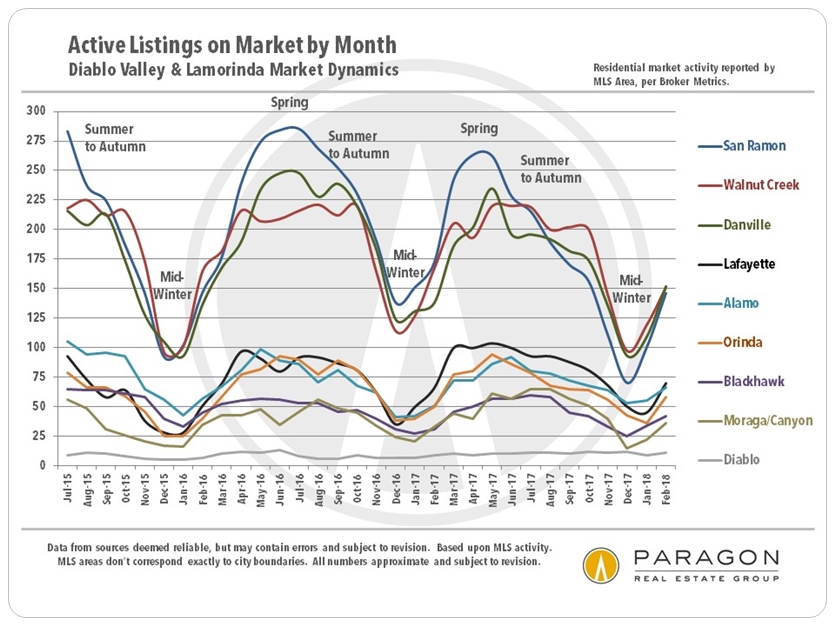 Sales, Price Reductions
& Listing That Do Not Sell

The last 12 months have been a strong market in area real estate, and the great majority of sales under $2m sold very quickly, and averaged a sales price over asking price. Those listings that had to go through price reductions before selling spent an average of 6.5 weeks longer on the market. And then for every 7 listings that sold, 1 listing expired and was withdrawn from the market, typically because buyers deemed the property overpriced. This is a relatively low ratio. As will be seen in the next section, on the luxury home market, the issue of listings that do not sell is much more substantial. 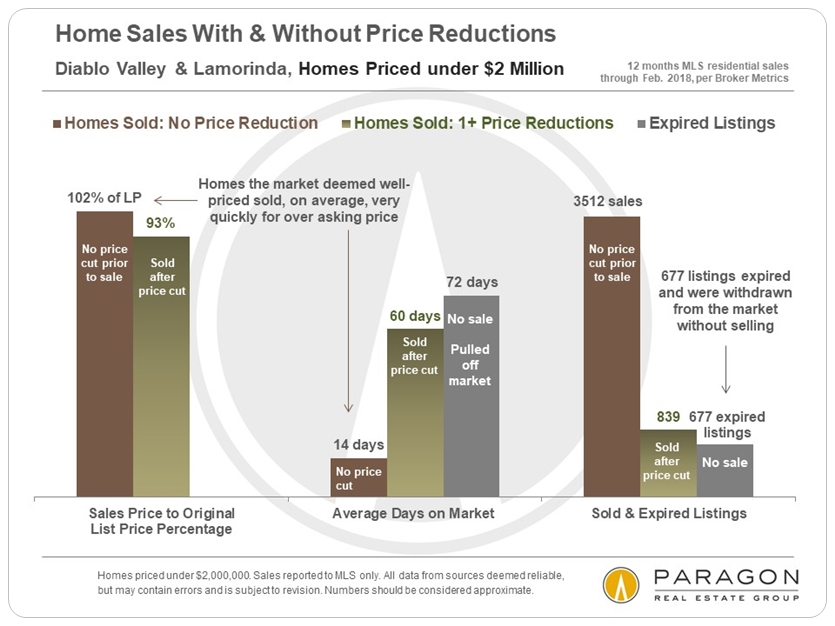 Another Bay Area trend has been the increasing number of luxury home listings on the market, which appears to be outpacing the increase in buyer demand for these expensive homes. We are just on the cusp of the spring selling season for luxury real estate, where inventory typically swells to its annual high point, and much more will be known regarding the direction of the market in the next few months. 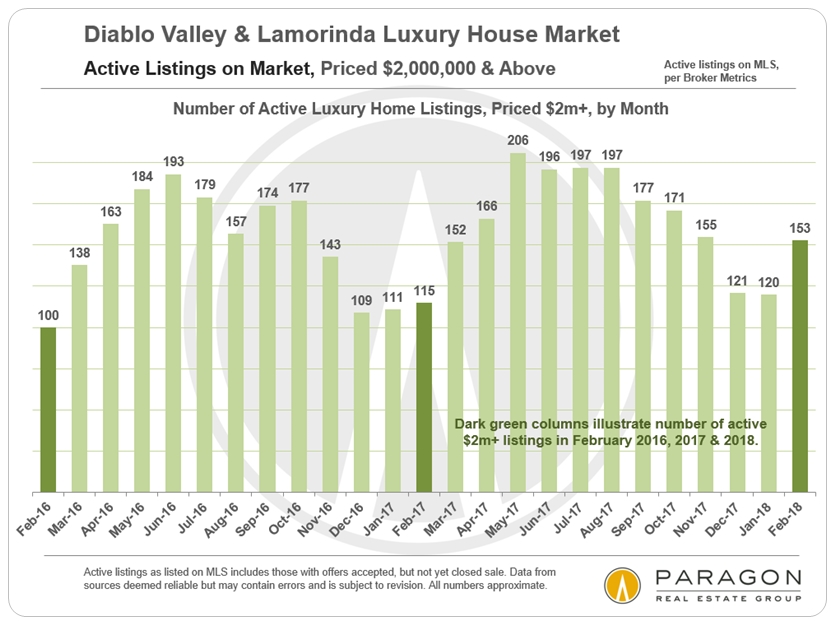 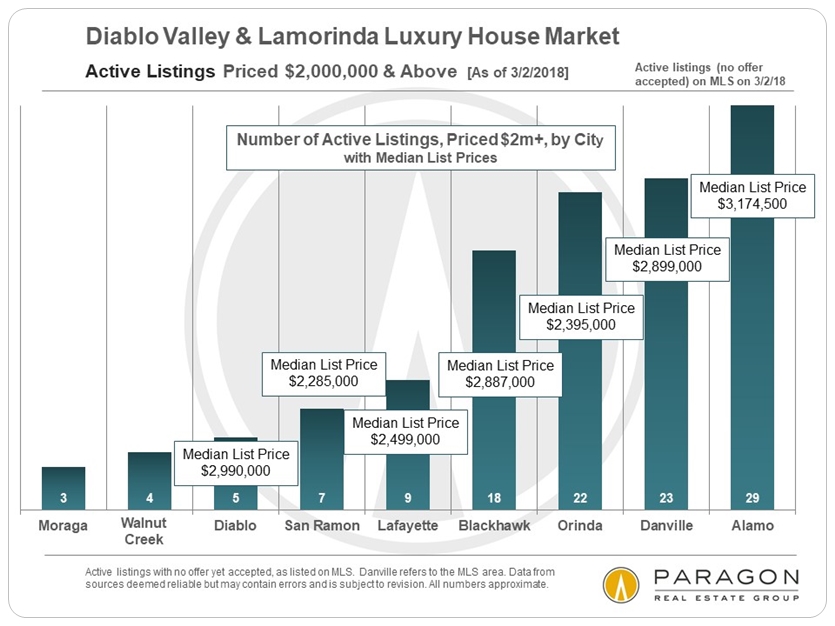 Luxury Home Sales, Price Reductions
& Listings That Do Not Sell

This chart illustrates the difference between high-end listings the market deems appealing and fairly priced – on average, selling quickly for a tiny bit under asking price – and those that have to go through price reductions prior to selling (on average, an extra 14 weeks on the market), and then those that do not sell at all, but expire and withdrawn from the market. The ratio of listings that do not sell is much, much higher in the luxury segment than in the general market, and this has everything to do with demand and pricing (or overpricing). 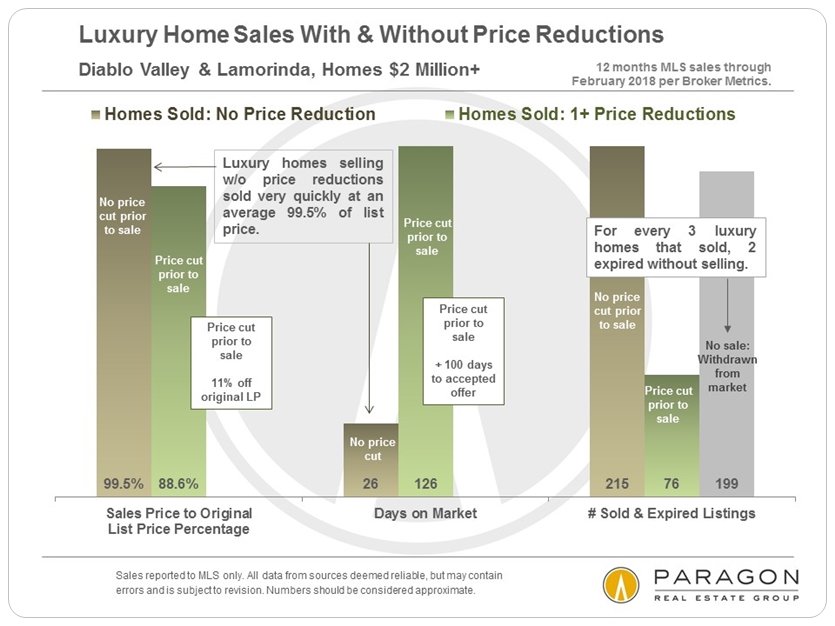 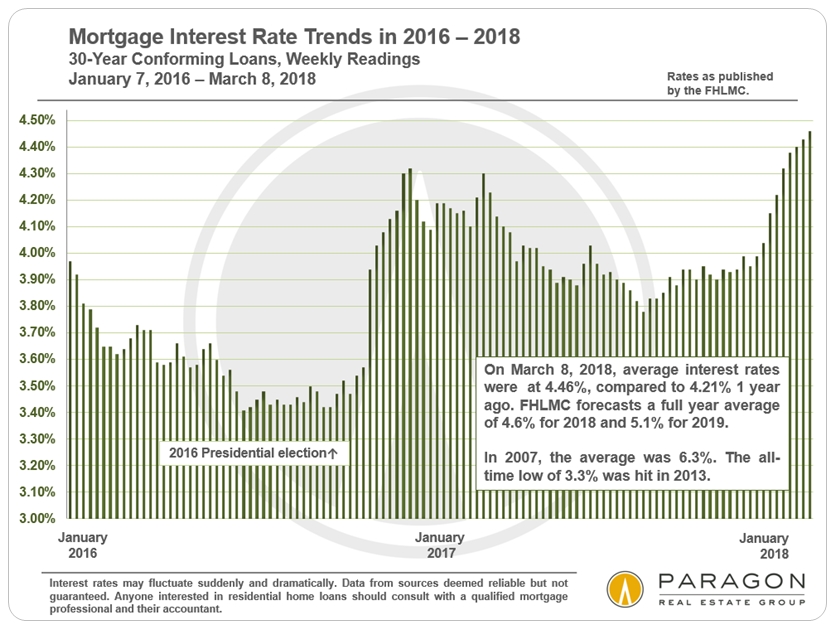 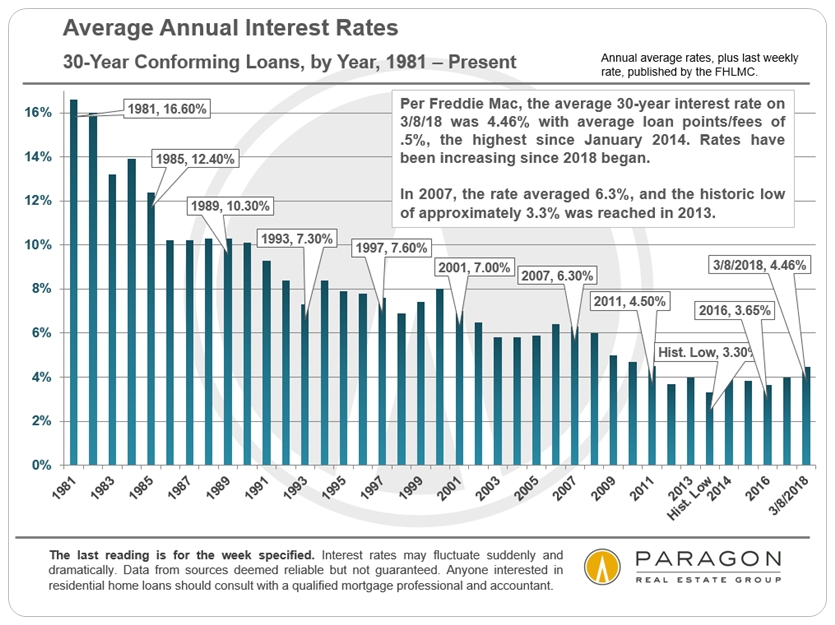 One of the macro-economic factors of concern is that debt levels, of virtually every kind, are hitting new highs in the country (and in the world). This has been heavily subsidized by the historically low interest rates prevailing in recent years, but rates appear to be headed upward, and increasing debt often plays a big role in market cycles. 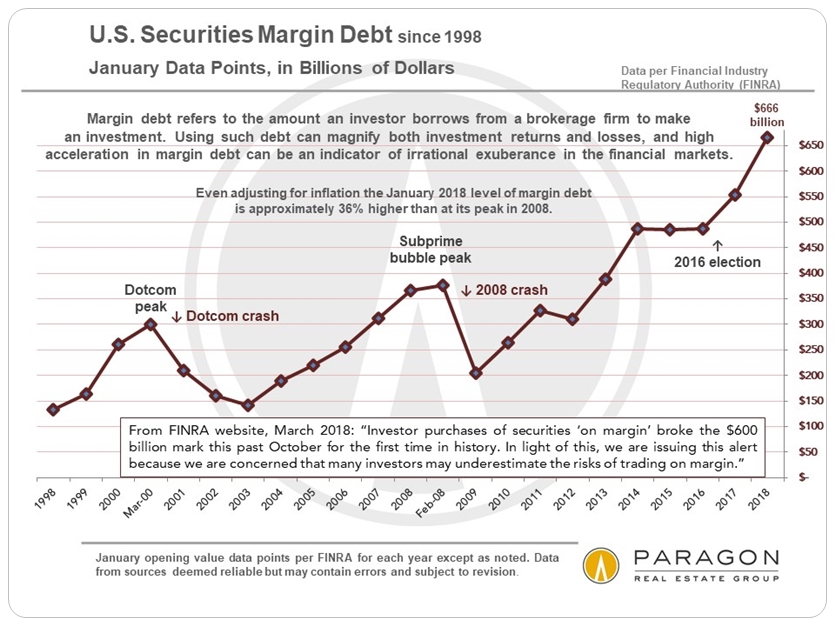 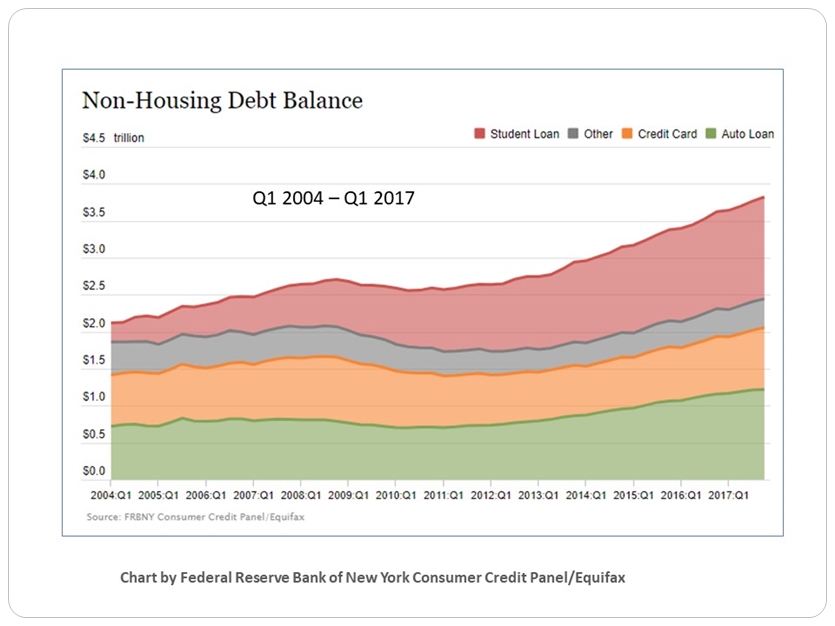 The amount of total mortgage debt in the country is now about the same as at its last peak in 2008 (not illustrated on this chart), but because of the plunge in interest rates since then, the ratio of mortgage debt service to disposable income was close to an all-time low in mid-2017. Interest rates have been rising since then, but are still about 30% lower than in 2007. The good news is that so much of mortgage debt in America is now in fixed-rate loans at very low interest rates, which adds much stability to economic conditions, a stability grievously lacking at the time of the 2008 financial markets crash. 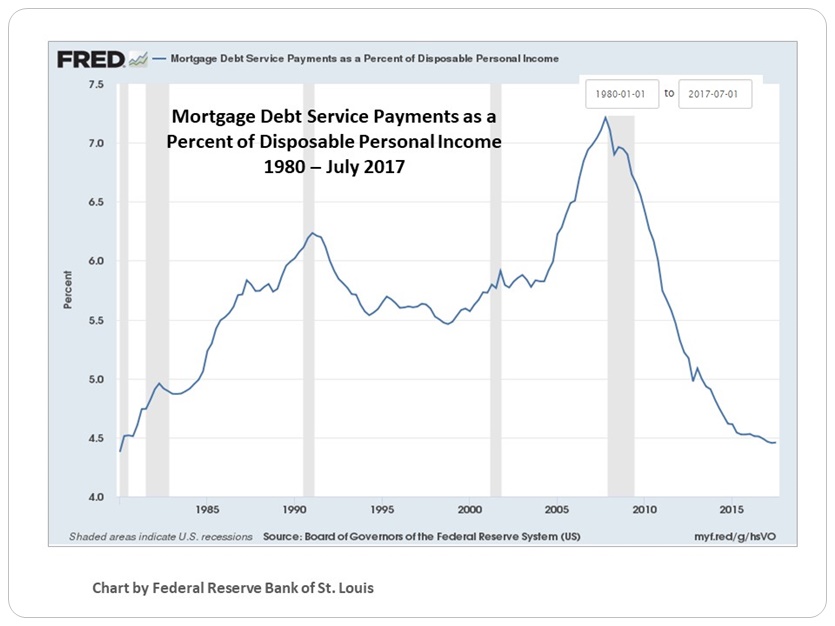 Link to additional charts on debt