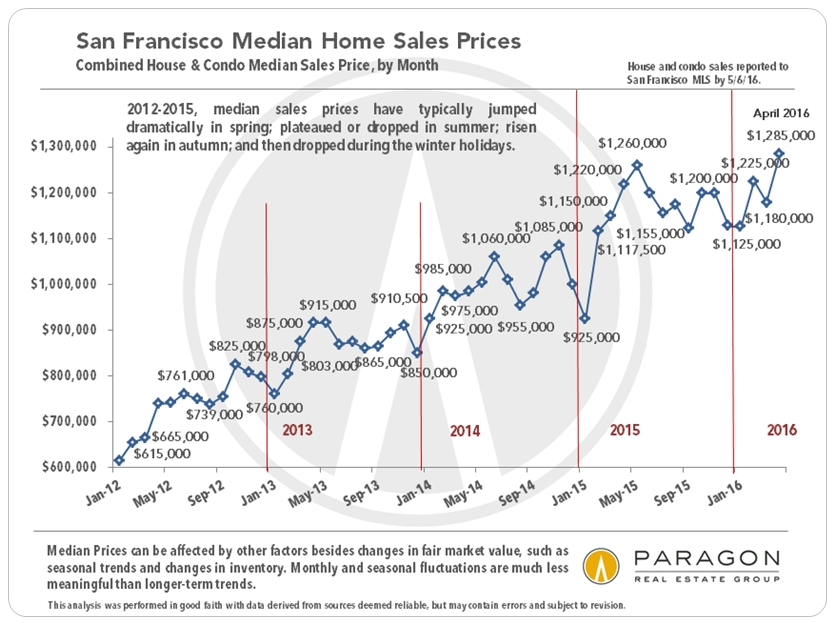 As seen in the first chart below, the combined house-condo median sales price hit a new high in April. However, as the second chart illustrates, so far this year, while median house prices continued to appreciate, condo and TIC prices appear to have generally plateaued. 2012-2015, spring was the most dynamic, high-demand/low-supply selling season of the year. 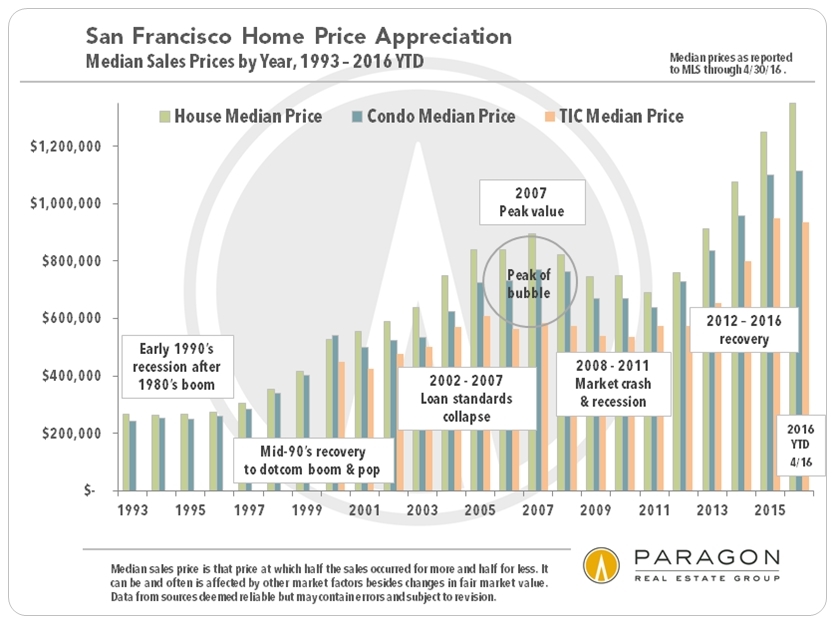 As mentioned in our April report, different segments of the market appear to be diverging. The below charts separate the San Francisco homes market into house and condo/co-op/TIC segments, then further subdivide each into 4 price segments. The lowest, most affordable, price segments are defined by the median sales prices for the first 4 months of the year. The highest price segments (or luxury home sectors) are defined, approximately, by the top 10% of sales.

Very generally speaking, the house market has remained hotter than the condo market, which appears to have cooled to some degree (but nothing remotely approximating a crash), and more affordable homes are seeing significantly more demand than luxury homes, where the pool of potential buyers is much smaller. The luxury condo market, in particular, may be being impacted by an increase in large, new, luxury-condo projects arriving on market, especially in those districts where they are mostly being built. The number of resale luxury condo listings in San Francisco hit an all-time high in April.

These analyses do not include new-project condo activity unreported to MLS, which is now a significant portion of the market: Unfortunately, our access to definitive data regarding current activity in new condo sales is limited. 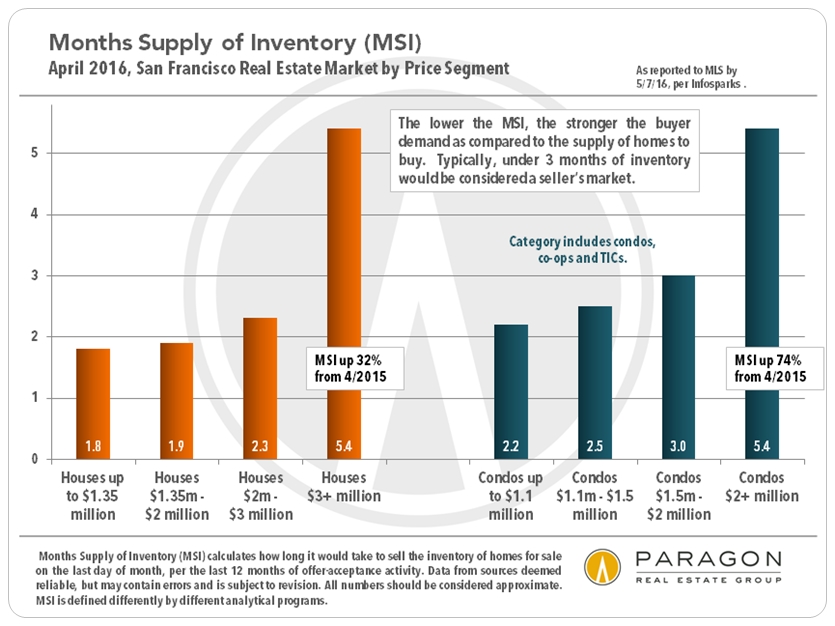 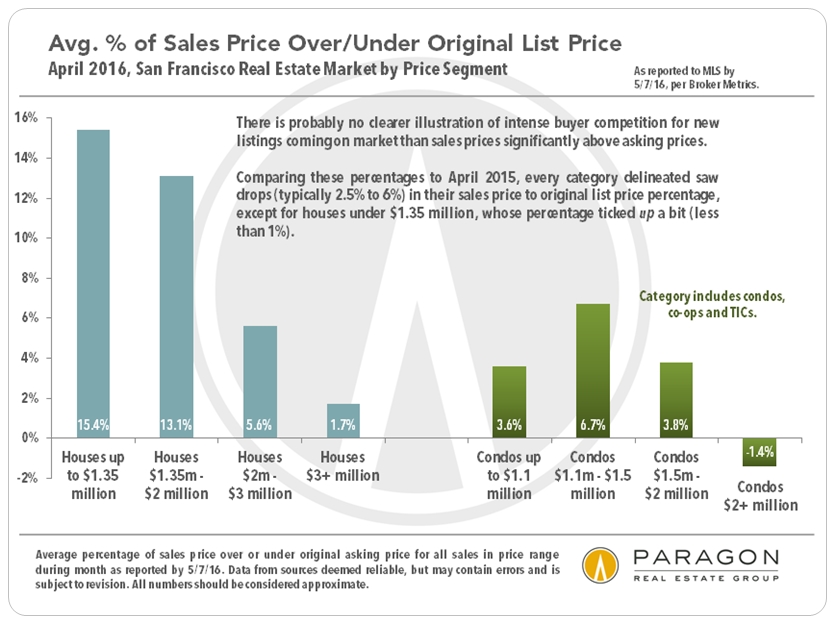 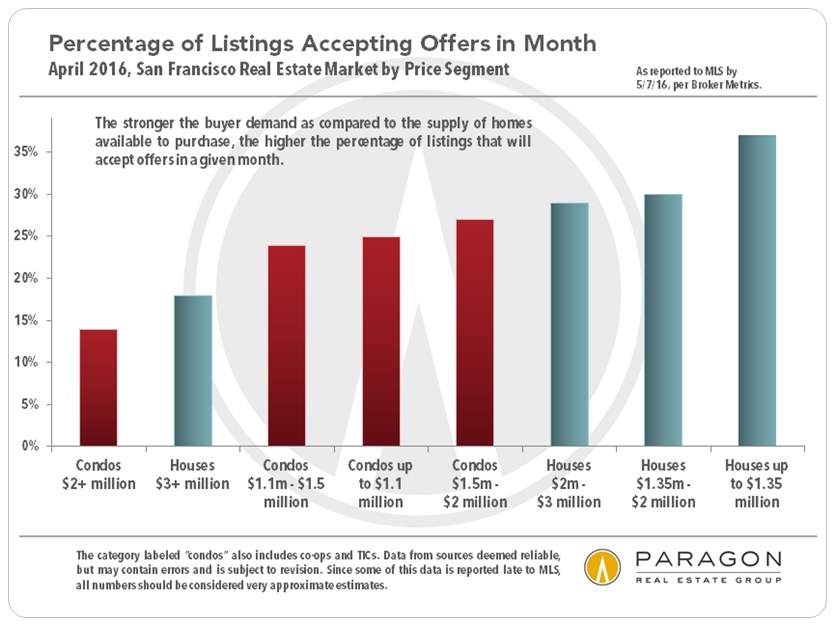 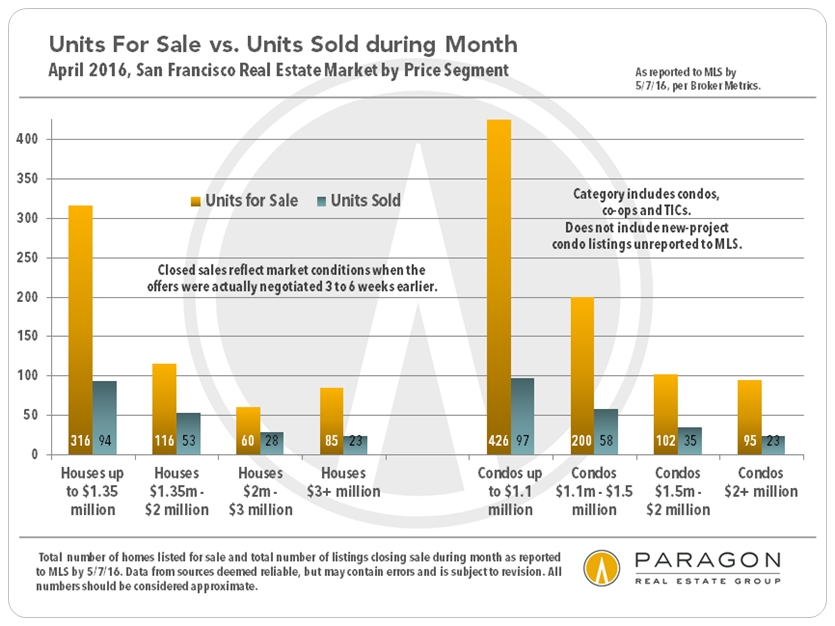 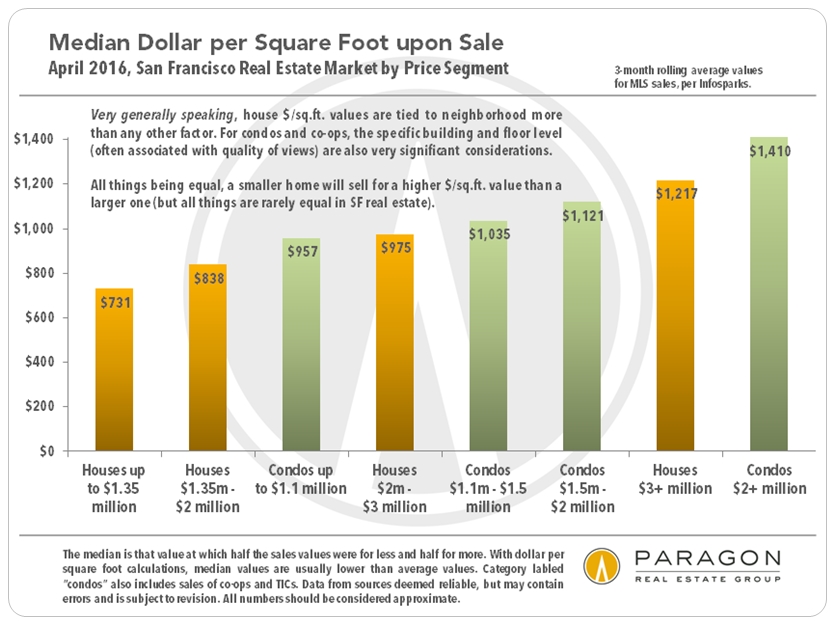 The first chart tracks year-over-year changes in annual median sales prices for San Francisco houses. The year of greatest percentage appreciation was 2000 at the height of the dotcom bubble (though on a dollar appreciation basis, recent years far exceeded earlier periods). This is a generalized overview: Homes in different neighborhoods and in different price segments often saw wide variations in annual appreciation rates. 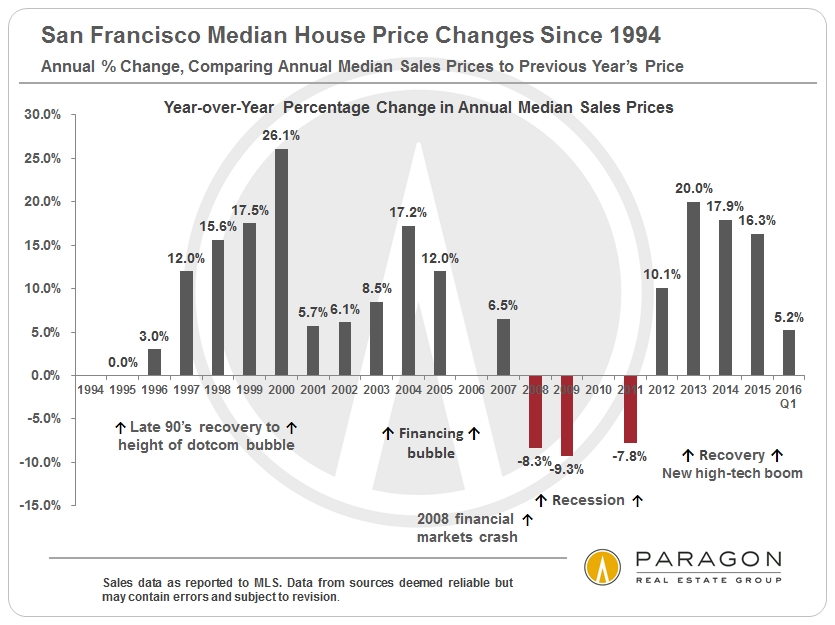 This second chart illustrates appreciation in average asking rents. Note how much rents declined after the dotcom bubble ended, while the effect of the 2008 financial markets crash was much milder. We have heard from multiple city sources that available rental inventory has significantly increased and renter demand significantly decreased in recent months, which may reflect a possible softening in new, high-tech hiring. We shall see if this begins to show up more definitively in upcoming rent and employment statistics. Or it may simply be a temporary lull in the market. 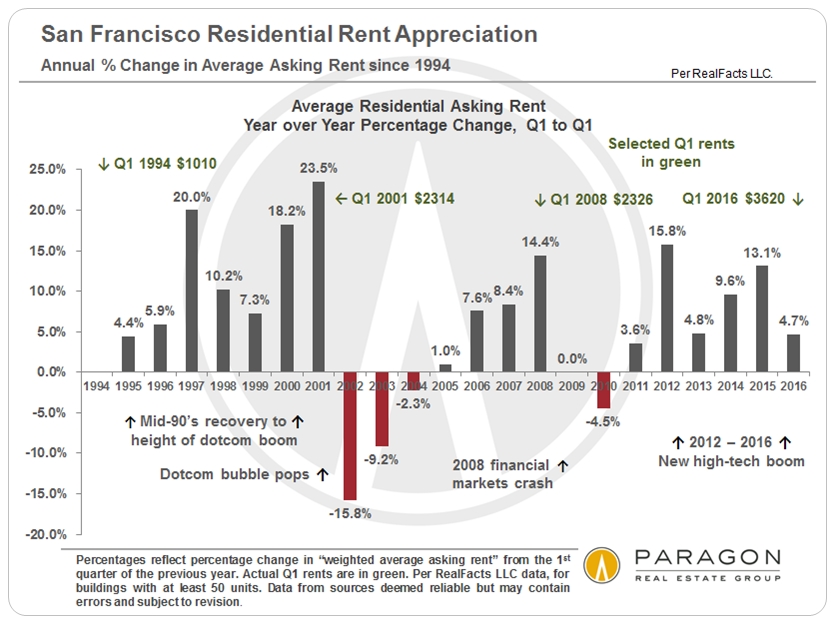 These analyses were made in good faith with data from sources deemed reliable, but they may contain errors and are subject to revision. Statistics are generalities and all numbers should be considered approximate. New construction condos not listed or sold on MLS are not counted in these statistics, though they often affect market dynamics. Sales statistics of one month generally reflect offers negotiated 4 to 6 weeks earlier. Last but not least, different analytical systems sometime calculate standard real estate statistics differently, which can deliver variable results.

Carolyn Gwynn did an outstanding job finding a home for us during an unpredictable and fast paced time in the market place. We moved to the San Ramon/Danville area from Dallas Texas and thankfully a good friend from graduate school referred us to Carolyn. Carolyn is easy to communicate with, professional, an expert in real… estate and an overall pleasure to work with. Carolyn has a unique, keen sense of what’s needed to make a transaction work and was able to guide us in a way that accomplished all of our goals and still obtain the home we wanted. It was Carolyn’s knowledge, experience and thoroughness that gave us our beautiful home. You will most definitely want Carolyn to be your Realtor whether you are buying or selling your home. We highly recommend Carolyn Gwynn. She is the best of the best. Read more “Carolyn Gwynn did an outstanding job”

From the moment I met Carolyn Gwynn I was completely at ease. Carolyn is professional and knowledgeable as well as being warm, patient and attentive. Selling my home as a single woman I didn’t have a partner to bounce thoughts off of during the preparation and selling process. Carolyn filled that need for me; always… available to answer questions and bounce ideas off of. She was mindful of my budget for getting my home ‘showcase ready’, spent ample time with me reviewing and refining decisions, and was able to provide me with the names of vendors and experts when needed. She was thorough in presenting comps to help me set a price that would attract buyers. And she was spot on in her recommendations. My house received multiple offers within the first week and was sold at a price over asking. The entire sales experience was easier because of Carolyn’s business acumen and calm demeanor. Never once did I feel that I was not in superb, competent hands. Would I work with Carolyn again? In a heartbeat!! Would I recommend Carolyn to others looking for a realtor? Without a moment’s hesitation. She is the consummate professional, with fine attention to detail that made me feel well cared for every step of the way. Thank you, Carolyn! Read more “From the moment I met Carolyn Gwynn I was completely at ease”

Carolyn gave us, clear concise and accurate input regarding the condition of the house and the market for such house. She gave us options along the way with the likely outcome. And the outcome was exactly what she said would be the result. There were no surprises throughout the process. She does not develop unrealistic… expectations. However, she also builds confidence in the process and optimism in the outcome. Read more “There were no surprises throughout the process”

If we could give Carolyn 100 stars we would. As many know, once you decide to buy and/or sell a home, you quickly start to spend a lot of time with your realtor. After several false starts with a handful of realtors in San Francisco and the East Bay, we were put in touch with… Carolyn. We were in the process of looking for a house to purchase and were overwhelmed by the process as well as by Bay Area real estate in general. Enter Carolyn, who was the mentor, coach, confidante, partner, and friend we needed. She is whip smart and was able to work with my quantitative, detail-driven husband with patience and thoughtfulness. She knew when to push us along and when to step back. We never felt pressured or uncomfortable. She was unflappable in navigating a somewhat stressful and ongoing negotiation process so that we ultimately were able to purchase the home of our dreams. She went above and beyond the call of duty 100 times. She’s proactive, uber-responsive, detail-oriented, thoughtful, and a master at managing a myriad of personalities. She made us feel like we were her only client when I’m sure she had many more just as needy as we were. We cannot say enough amazing things about her. In sum, you know you’ve found a good realtor when you are literally sad the home-buying process is over because you will miss your time together! She’s that good. She made a scary and daunting process not only tenable, but enjoyable. Note: While Carolyn is based in Danville/Alamo, she was an expert as we looked at homes all over the East Bay (including Alameda, Oakland, Piedmont, Orinda, and Lafayette). We ultimately ended up buying in Orinda. Read more “If we could give Carolyn 100 stars we would”

She really took the time to understand what was important to us in what we were looking for, and did an extremely thorough job in previewing everything in the marketplace … She also went above and beyond what many realtors would do in taking care of us, right down to stepping in to take care… of removing the previous owners’ junk that they should have cleared out themselves. She is truly committed to making every step of the process as easy and enjoyable as possible for her clients. I can’t recommend her highly enough. Read more “Carolyn was a godsend…”

Carolyn is absolutely wonderful to work with during the stressful time of selling a home! She is an excellent communicator, reliable, knowledgeable, personable, and just an overall pleasure to interact with. Perfect blend of savvy professional with compassion. She not only works hard to get you the best price possible but she doesn’t leave a detail… out in all the nuances of selling property. I would love to partner with her again in the future. Read more “She is an excellent communicator, reliable, knowledgeable, personable”

Carolyn Gwynn was a consummate professional throughout the entire home sale process. She was thoughtful in her approach across multiple facets — timing, price, process, negotiations, etc. She went the extra mile and successfully navigated a complicated relocation sale process and was considerate  of our personal constraints. She did a wonderful job maximizing value in… an transparent, professional way. We highly recommend Carolyn. Read more “She went the extra mile”

Michael Fletcher
Danville
All Testimonials
Back to top